Usually, we never care how a computer executes a program, but in many program languages, we always are noticed that you need carefully allocate and release the memory. If you don’t, you may get a memory leak, which may cause the computer system to kill your progress.

Of course, we don’t do this by ourselves now. In modern advanced program languages, they usually provide automatic memory management. You can freely allocate a block of memory and don’t care when to release it, and the compiler will observe it and release it at the appropriate time.

But in some high-performance scenarios(game, basic frameworks) or memory limited, we need to control the memory usage manually and do our best to optimize the usage rate. This time understanding the basis of computer memory management is the basis to write fine code.

Next, let’s look at the composition of a computer storage system:

Disk: Disks usually have a large capacity. We use them to store large files. Disks are also used to store data persistently because they can keep data without electricity, but their data exchange speed is very slow.

Memory: When running a program, the computer system must copy it from the disk to the memory. The data exchange speed of the memory is much fast than the disk.

Register: Registers are the very small and the high access speed electric elements in CPUs. The capacity of a register is tiny, and every register can only store 64 bits of data in a 64-bits computer system. A CPU usually has dozens or even hundreds of registers for performing complex tasks.

Registers are significant for a computer to perform tasks. The CPU uses them to perform mathematic calculations, control the number of loops or mark its running status. The further information about registers we will talk about it later below.

Cache : Why does the computer system need to add a cache for the CPU? Although the memory is high-speed but not enough compared with the execution speed of the CPU. If using the CPU directly exchanges data with the memory, the memory will depress the performance efficiency seriously, so we need a cache to store the data used frequently to optimize this problem. Of course, we can’t cache all data we need, and engineers designed a complex algorithm to pick what data we should cache.

Finally, we should know that the CPU cannot execute the program code directly. We need to translate the code to CPU instructions. We can only use CPU instructions to order the CPU to perform various calculations. Every kind of CPU has its own instruction set, but they don’t have a big gap.

The memory of a computer

Another problem is that a program can easily access all the data of the whole memory. If you are running a rouge program, it might steal your data or crash your system. Too dangerous!

Every address a program uses is virtual. Two same virtual addresses in different programs will be mapped to a different address in real memory. It provides the system the ability to manage the whole memory, making controlling memory permission possible. We can set the memory used to save data that doesn’t have execution permission, the memory used to store code cannot be modified. The memory occupied by the system cannot be accessed.

64 Bits CPU
Now personal computers usually use 64 Bits system and CPU, and the latest software is also developed with 64 Bits. As we calculated above, A 64 Bits CPU has an 8 Bytes data bus but doesn’t have the same wide address bus because its virtual memory space is too big that the hardware we recently created hardly supports this.
Intel CPUs, i3, i5, and i7 usually have a 40~50 Bits address bus. Both Windows and Linux have a length limit to virtual addresses. In 64 Bits systems, they can only use the low 48 Bits. Even so, the virtual memory space we calculated is 8 Bytes * 2^48 = 256TB. We don’t need so much memory space in the foreseeable future.

In the computer system, the memory use Byte as the storage unit. We can theoretically access any byte in the memory, but the CPU uses the address bus to access data. In the 32 Bits system, once addressing can access 4 Bytes data. The 64 Bits system, once addressing can access 8 Bytes of data. A 32 Bits CPU once can process 4 Bytes of data. To be more efficient, it would access 4 Bytes once addressing.
Taking the 32 Bits CPU as an example, the actual addressing step is 4 Bytes. The CPU would only access the memory address of a multiple of 4 (e.g., 0, 4, 8, 12) and cannot directly access these addresses 1, 3, 11, etc… In this addressing pattern, we don’t need to address an address repeatedly and ignore any address.

Try to store a variable in an addressing step range. Avoid storing variables over a step range, and this is the memory alignment.

In the above example, we define a struct having two int properties and one char property. In 64 Bits system, the int type occupies 4 Bytes memory, and the char type needs one Byte. Normally, the struct Person’s size is 4 + 4 + 1 = 9 Bytes, but actually, the executing result is 12. Look up the addresses of the me.b and the me.c you can find the address of the me.c doesn’t follow the me.b, it aligned its address to the next addressing step. The memory alignment sacrifices memory utilization for access efficiency.

What’s the memory paging?
An application doesn’t use all its memory at the same time. We can copy partial unused data from the physical memory to the disk thanks to virtual memory mapping. When we copy the memory data to the disk, we don’t copy byte by byte or copy in addressing steps. The system will copy a block of memory at a time. We term it as the memory page.

Modern computer systems all use paging to map and divide virtual and physical memory. The concept of paging is dividing the memory into multiple parts, and we can only copy the necessary data from disk to memory when running the application. If the physical memory is not enough, we can copy partial former data to disk for releasing memory space.

The paging size
The paging size depends on the hardware design. Some CPUs might provide several paging sizes, the computer system can freely select, but the system can only use one paging size simultaneously. Almost all PC systems select 4KB as their paging size. If our computer is 32 Bits, the virtual memory space is 4GB, and one page occupies 4 Bytes, total having 232/212 = 2^20 pages. The physical memory also uses the same way to divide. 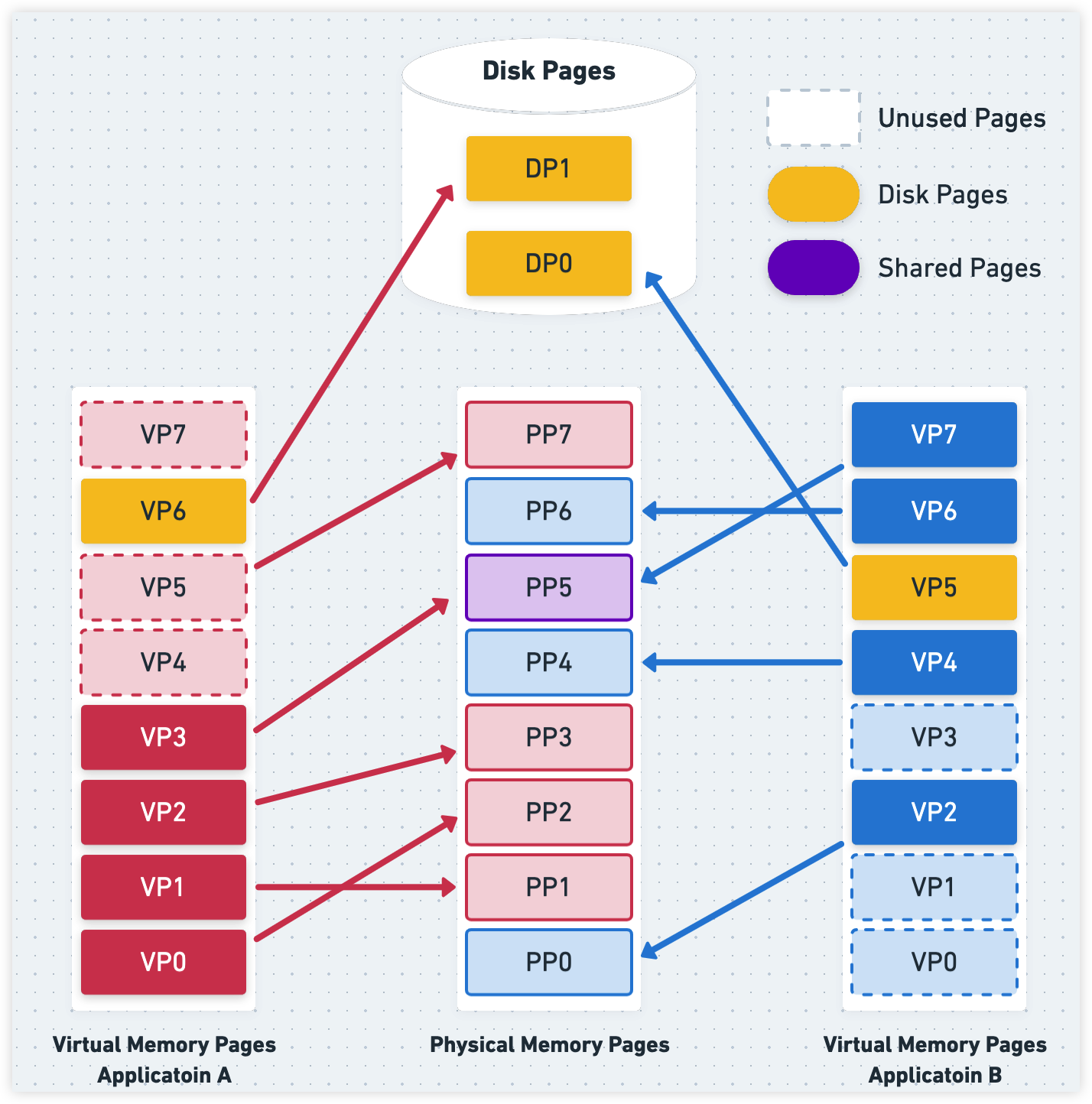 A program needs to be copied to memory before executing it, but what’s the distribution of the program binary data in memory? Where does the computer store dynamic data generated while running?